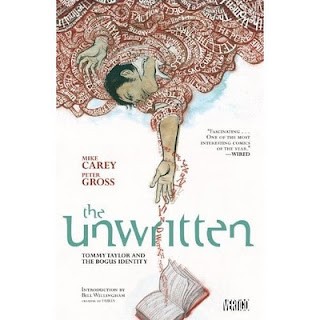 And now for something completely different. Well, not entirely. Mike Carey riffs on Harry Potter, Fables (Bill Willingham wrote the introduction to this collection), and real-world fandom, telling the high-concept story of a young man who has the same name as a fictional boy wizard in a series of books written by his father.

There's a lot of talk about capital-S Story, and a digression into the life of Rudyard Kipling feels very much like The Invisibles. (Which could be good or bad, depending on what you think of the The Invisibles.) For me, Unwritten was more accessible than Morrison's stuff, and didn't overload the narrative with literary trivia or illustrated acid trips.

I'm hoping Carey can continue balancing the mundane and the sublime for at least a few dozen issues. I know, I know, you loved his Lucifer, but that was mostly fantasy, wasn't it? Writing a semi-magical human world without underselling it or going over the top is a challenge, and Neil Gaiman just keeps making it tougher for the rest of us to measure up. Bastard.