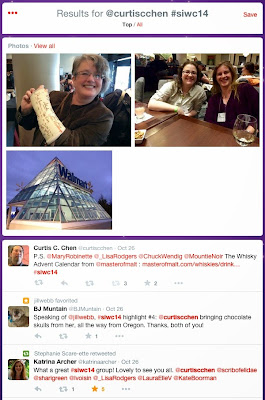 If I can make my schedule and budget work for 2015, I'll definitely go back. And next time I'll wear the tux on Saturday. #nocontextforyou

This month, we talk to Laura E. Hall and Mink Ette, two of the six creators behind Spark of Resistance, Portland's first live, interactive room escape game! (No spoilers herein. You can see some mildly revealing photos of the room in the recent Oregonian write-up.)

Music: instrumentals from "Code Monkey" and "A Talk with George" by Jonathan Coulton

I Am Not Canadian

I recently came across this post on Weibo, China's Twitter-like "microblogging" service:

To be fair, I can see how someone in China might be confused, since I do live in "Vancouver." Speaking of which, I keep meaning to pick up one of these t-shirts: 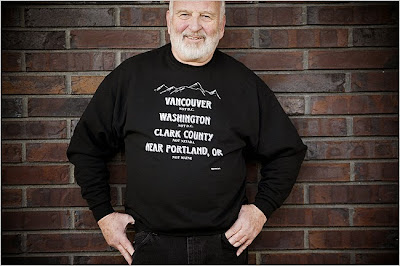 
"The story was excellently crafted. The plot had tension and several layers of things going on, yet no word seemed redundant and all of the sentences were simple-yet-varied."
— Natso, "A Cool Sci-Fi Short Story, A Question That Sprouted From It," 20 Sep 2014

"This story could’ve been bleak, but instead it made me happy and hopeful."
— Sara Norja, "Sunday recs: Fairytale, memory loss, alien chess," 28 Sep 2014


Finally: I'm going to be at #SiWC this weekend, along with at least two other VP alums. It's my first time attending this particular conference. Excitement!

But it's nice to see that publishers still believe in science fiction.

Last month, this bit of news showed up in the Publishers Lunch daily newsletter: 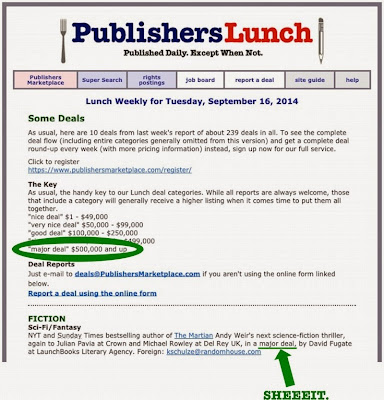 Try not to think about the fact that Weir originally self-published his first novel, The Martian. Or the fact that he also got a six-figure publishing deal for that book. Or the fact that The Martian is now being made into a movie, directed by Ridley Scott and starring Matt Damon and Jessica Chastain, scheduled for release in November of 2015.

One of the most valuable lessons I learned at Viable Paradise (which is happening again this week, by the way) was this:

Do not compare your own writing career to any other writer's career.

Everyone finds a different path to publication. Everyone has a different story—literally. Keep writing. It'll happen. And meanwhile, make sure you're enjoying the ride, because it'd be a shame if you didn't have some fun during those years (and yes, it will take years).

In related news, huge congratulations to my fellow Pacific Northwest writer Jason Gurley, who just sold his novel Eleanor to a publisher! (Oddly enough, his book was also self-published originally, and it also went to Crown—just like The Martian. Coincidence?)

Jason and I, along with thirty other authors, will be attending Story Con this Saturday at the Fort Vancouver Community Library. If you're in the Portland, Oregon area, stop by and check out the panels, readings, and signings—I'll be moderating a panel on flash fiction which I promise will not be boring! 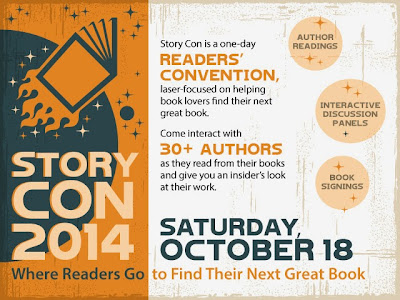 That something was #SportsNight2014.

If you follow my writer persona, you may have noticed me retweeting some of my favorites:

Natalie gets really into Call of Duty #SportsNight2014

Elliot won't stop talking about The Wire. Kim and Dave refuse to watch it just to spite him. #SportsNight2014— Nicholaceration Bond (@nbond) October 4, 2014

Dan finds a copy of "50 Shades of Grey" in the break room and is determined to find out who it belongs to. #SportsNight2014— Maggie Klaus (@Maggie_Klaus) October 4, 2014

And speaking of Fifty Shades of Grey, did you know that I, too, have dabbled in Sports Night fan fiction? It's true! Oh, it was many years ago, when I was a tender and callow fellow, but I still love my crazy pitch for the 9/11 episode of Sports Night—shown below.

(I'm only going to reprint the relevant portions of my original blog post from nearly twelve years ago, since many of my opinions have matured since then—in particular, I've become much more bullish on fanfic.)

My girlfriend [now my wife :) -CKL] gave me the Sports Night DVD box set as a Christmas present, and we watched the pilot episode last night. I noticed several things that I had forgotten about the show. The most heartbreaking was the opening shot, which had been missing from the syndicated reruns: the World Trade Center towers glittering in the night. [Note: that omission may not have actually happened, but it's what I remembered at the time. -CKL]

Sports Night is set in the studios of a fictional cable television network, CSC, presumably located in the World Trade Center in Manhattan. (I don't think this is ever actually mentioned in the show, but let's run with it for now.) And presumably, Comedy Central cut out that opening shot after September 11, 2001. I don't blame them for doing it. The show only ran for two seasons, from 1998 to 2000, and it would be pretty depressing to think, while watching the reruns, that those characters had perished later, when the towers collapsed...

So here's the Sports Night fanfic-- no, let's call it the lost episode, the one that Aaron Sorkin never wrote-- that I'd like to read. It's the September 11th episode, which I'm sure he would have done if the show had still been on the air. He did one for The West Wing, and Sports Night is set in Manhattan. In the World Trade Center.

It wouldn't be a flashback episode. That would be too easy, too simple a tearjerker: look how happy we were before! No, I think Sorkin's smarter than that. It would be a "bottle show," just like the 9/11 episode of West Wing-- set in a single room, or at least only on the standing sets for the show. No location shooting. Just talking.

I imagine it's in a coffee shop near the WTC. Maybe next to Battery Park. It's just after noon on September 11, 2001. The towers have collapsed, but there's still dust in the air. The Sports Night staff began evacuating right after the first plane hit the north tower. They think everybody got out, but they've been separated. Only a few of them made it to this coffee shop. Isaac, Casey, Jeremy, Natalie, some of the tech crew. Dan, Dana, and the rest are somewhere else. Nobody wants to say "missing."

This is Casey's story. His show, and the network which aired it, had been in danger of folding just last year. And then a stranger in a bar told Dana about coaxial cable, and CSC was bought by a holding company named Quo Vadimus. The network and the show were both saved. Jeremy and Natalie got back together. Isaac had recovered from his stroke. Things were looking up.

That was last year. That was this morning. And now, less than four hours later, the Sports Nights studio is part of a pile of rubble in lower Manhattan, and the two most important people in Casey's life-- Dan and Dana-- are missing. But nobody wants to say "missing." They say, "They're not here," or "They're somewhere else," or "I don't know."

Eventually, Casey blows up and says it: "They're missing!" That sets people off. Jeremy rants about Islam and how Arabs hate Jews, until Isaac delivers a disarming insight on race relations drawn from his rich life experience. The techies, still in shock, supply infrequent commentary on the sporadic news coverage coming from the television. The TV breaks; they try to fix it. Comic relief.

Emergency workers show up looking for water. The teenage kid behind the counter insists on charging them full price for the bottled water-- over $100. Casey watches the conversation, then finally loses it when the rescue workers can't come up with the cash. (Phones are down; credit card authorizations won't go through.) He goes ballistic on the kid and nearly punches him until he realizes how scared and confused the kid is. He doesn't know what to do. He's just a kid. All he knows is what the manager tells him.

Casey pays for the bottled water and helps the workers carry it out. The TV's back on. People are talking. Natalie confesses to Jeremy that she's scared of what's happened, and what might happen next, but she's more scared of how much he hates the Palestinians, and she can't understand any of it. Dialogue ensues. People are trying to use their cell phones, with varying degrees of success.

Natalie's phone rings. It's Dana's number, but it gets disconnected. Casey returns, grabs the phone, tries to call Dana. Nothing. He wants to go out and look for them. Others remind him that they agreed to meet here, everyone knows where this place is, what if they come back while he's gone? As if to support their argument, another one of the techies-- maybe Will-- arrives, bloodied, dusty, limping, barely coherent.

Someone will, of course, make a joke at some point about how similar the names "Dan" and "Dana" are. It will snowball into something ridiculous, possibly involving sex-change operations or maybe just wigs, and people will laugh themselves silly.

Everyone in the coffee shop watches President Bush on TV, speaking from Barksdale AFB, explaining how security measures are being taken and trying to articulate what nobody can. The phrase "cowardly acts" sparks some discussion.

The show ends with no sign of Dan or Dana.


Savvy readers will recognize my "ripped from the headlines" repurposing of the actual incident in which a New York City Starbucks outlet charged 9/11 rescue workers $130 for three cases of water. If I actually scripted this thing, I'd use that as the thematic linchpin. Maybe I will use it, or a modified and not legally actionable retelling, somewhere else someday. (This is where you comment and tell me someone has already done it better than I ever could have.)

I like what Sorkin did on West Wing and what he's doing on Newsroom, but I LOVE what he did with The Social Network because it's the closest he's ever come to recapturing the magic of Sports Night. I do appreciate what he attempted to do with Studio 60 on the Sunset Strip, but it (like West Wing and Newsroom) got bogged down in dealing with the actual work being done in the workplace in question.

Sports Night and Social Network were able to soar because we (the audience) never had to care that much about actual sports or software engineering. The important thing was seeing how the characters dealt with their jobs. We needed to know that the work wasn't life-or-death every damn day, and we also needed a conceptual air-gap to buffer us from having to understand how live television production or dynamic web sites actually work. (To put it in terms of Pixar story rule #4: we care more about the "One day ___" part than the "Every day, ___" part.)

It's not about the job. It's always about the people.

This is #SportsNight2014 on CSC. Stick around!

AND THAT'S OKAY. ISN'T THAT RIGHT, THE DOUBLECLICKS? RIGHT.

I don't have any big plans for my birthday this year—mostly because, honestly, it'll be hard to top last year's incredible awesomeness—but it's been a really good year so far...
What's next? Well...
Life is good. :)