Jasper here! This is part nine in a twelve-part series, looking at the teams who will be playing in The Famine Game this fall!

District Nine grows grain! Which is an ingredient in many types of cat food, even though we are obligate carnivores! Raaawwwrrr!

Filking! They're filking! And consuming alcoholic beverages on camera! Hide your kids, hide your wife!

Anyway, Dustin, Mike, Alex, Donna, and Dave certainly seem to know their way around the wilds of... a local state park? 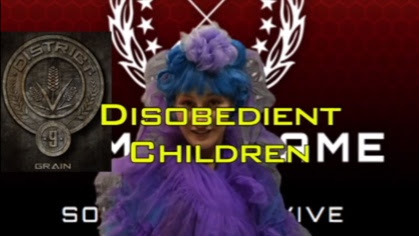 This teams sounds like a bunch of troublemakers, if you ask me!

Since they didn't provide a public video, here's something else for you to watch!

Next week: meet the teams from District Ten!

Congratulations to our friends Sunshine and Acorn on their fantastic nuptials, which featured crossword cake, electronic art, and thrilling dances!

Music: instrumentals from "Code Monkey" and "I Feel Fantastic" by Jonathan Coulton; excerpt of "I Swear" by The Minions from Despicable Me 2 soundtrack

This is the last of my weekly flash fiction stories. It's been a great, nearly-five-year mission, and I'm ready to move on to something even bigger and better. On the immediate horizon: getting two different novel manuscripts off to four different agents, as follow-up to pitches I made at the Willamette Writers Conference.

After that: working with DeeAnn to put together the "Best of 512" collection we've been talking about for a while. More news on that, possibly including a reader survey, coming soon.

Jasper here! This is part eight in a twelve-part series, looking at the teams who will be playing in The Famine Game this fall!

District Eight makes textiles! Textiles are used in clothes! And hats! By the way, cats do not like hats, contrary to liberal media propaganda.

I recognize many of these humans from their excellent work running the World Henchmen Organization Game a couple of years ago, not to mention several other events in the Seattle area! They sure seem to enjoy wearing a wide variety of hats, costumes, and personalities. Keep your eye on Jett, Nikhil, Sergey, Jeff, Donna, and Rena--I'm sure they're putting together real spiffy fancy-dress outfits for the Friday night opening of the Famine Game! 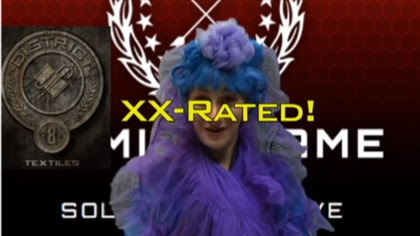 This team also chose to keep their application video private, but I'm guessing they're captained by the crafty Rachel Weinstein Petterson, Ph.D.! And if that is the case, she has surely assembled a brace of brainy ladies who will give The Hunger Dames a run for their money! So to speak. I don't think there's any actual money on the line here!

Next week: meet the teams from District Nine! (Not that one.)

SnoutCast #183: You've Got Nothing To Prove

In which everybody's free to feel good. (Hi Brandi!)

Music: "Nothing To Prove" by The Doubleclicks plus instrumentals from "Code Monkey" and "You Ruined Everything" by Jonathan Coulton

Read "My Least Favorite Martian" at 512 Words or Fewer


My Favorite Martian was produced at the same time as other situation comedies that featured characters who could do extraordinary things, as a parody of the standard family situation comedy. The show was an example of science fiction comedy, differing from Bewitched and I Dream of Jeannie in that the central character was a man, and in that he relied on science and advanced technology rather than magic.


I distinctly remember watching reruns of Bewitched, I Dream of Jeannie, Star Trek, and Space: 1999 while growing up. This probably explains a lot about who I am today.

Jasper here! This is part seven in a twelve-part series, looking at the teams who will be playing in The Famine Game this fall!

District Seven is known for their lumber! I hope that's a noun and not a verb! 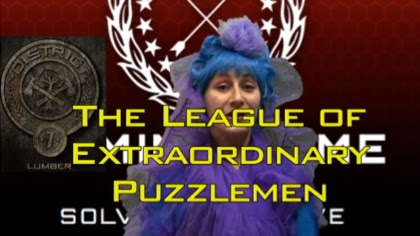 These humans didn't make their application video public, but if it's the same team listed on the Bay Area Night Game (BANG) site, it should include puzzle masterminds Nick Baxter, Derek Kisman, and Thomas Snyder!

Well, I recognize two of those humans: Sarah Barnum, formerly of team Blood & Bones, and some guy named Rex who is currently playing in the Great America Race! Plus, I don't know if you noticed, but two of the other humans gave themselves away as husband and wife in this video. Giving away personal information? I'm not sure that's a great strategy, guys!

Next week: meet the teams from District Eight!

This week, we talk to Jason Wodicka, who has run many puzzle events in Seattle, including ten Puzzled Pints for the public and two Amazon Puzzle Hunts for interns and employees!

(And in case you're wondering, the three phrases in the title are all anagrams of "Emerald City.")

Friday Flash Fiction: "Money for Nothing"

Read "Money for Nothing" at 512 Words or Fewer

True: the image in this week's 512 has absolutely nothing to do with the story, but receiving that object in the mail this week was so serendipitous, I couldn't resist showing it off.

Jasper here! This is part six in a twelve-part series, looking at the teams who will be playing in The Famine Game this fall!

District Six handles transportation! I'm not sure what that means. Do they build trains? Provide operators to drive them? Do they also refine the fuel products used in such vehicles? It's honestly a bit confusing. Get it together, Suzanne Collins!

You know these guys! They're pirates! Kenny, Andrew, Dave, Jeff, Peter are pretty well known in the Microsoft puzzle community, and I'm sure they'll do just fine in the Capitol! Unless they die! That probably won't happen.

These may not be exactly the same Burninators as you've seen in other puzzle hunt events, but don't underestimate them! Doug Zongker once created Isotropic, an online version of the popular deck-building card game Dominion! Dan Egnor maintains the Puzzle Hunt Calendar, and a few years ago, shared some of his favorite Computer Tools for Puzzle Creation & Solving! And their teammates Cynthia Wong and Kekoa Proudfoot have bicycled through the Alps! Humans do some pretty wacky stuff.

Next week: meet the teams from District Seven!

THAT'S NOT A TYPO THAT'S A PUN OKAY GET IT.

Yes, I am ironically referencing a trope. No, I don't know if this would have actually turned into a full-blown romance if I had continued the story. Maybe I'll go back and find out someday. Someday.