I had a great Memorial Day weekend

As shown in these spoiler-free photos, and one video:

DeeAnn and I traveled to the Bay Area to visit friends and participate in a few different puzzle-hunt-ish events, including Team Snout's annual business meeting, volunteering for Shinteki Decathlon 9, playing the Cluekeeper "Stanford Puzzle Tour" with Larry Hosken, and attempting to "Escape from the Moon Base" (our first Real Escape Game experience) with Larry, Corby, Yuan, and Mike.

It was a great trip, albeit a little exhausting: was California always so brutally sunny? Or have we just grown accustomed to the Pacific Northwest?

I will not watch most of these TV shows

But I am an interested observer during every fall TV season. My household has not had a cable or satellite TV subscription for seven years now, but we have the Internet. And that's all you need to watch TV these days, especially with my viewing habits: I don't surf, I research.

The five broadcast networks just announced their fall schedules, and out of the twenty-five new shows, there are three I'm definitely interested in, seven others I might try out if I hear good reviews, and three descriptions that make me cringe. (Note that those last shows might still become very successful, since a one-sentence logline can't possibly capture the nuance which buoys or sinks a weekly series. Hell, I thought Veronica Mars sounded stupid before it premiered, and I ended up loving that show.)

1. If Gotham the TV show is even a quarter as good as the Gotham Central comics were, it'll be worth your time:

2. If the new Flash TV is half as good as Arrow, I'm in. And I love that they're starting the show with a Scooby Gang right away:

3. I'm not quite as bullish on Constantine, but you know, I even liked the Keanu Reeves movie, so I'm cautiously optimistic:

It's not a coincidence that these are all based on comic books. TV and comics have more in common with each other (and classic pulp fiction) than many other forms of storytelling. Let's talk about that sometime.

And here are the seven new shows I might check out if I hear good things:

Identifying the three cringe-inducing blurbs in Entertainment Weekly's Fall TV complete schedule 2014 is left as an exercise for the reader.

One last thing: can we all agree that CSI: Cyber is the most 1990's title ever? Including actual shows from the 1990's?

This month, we talk to Dr. Catherine Hagan, who recently ran a puzzle hunt for her colleagues in the Department of Veterinary Pathobiology at the University of Missouri!

I Don't Know Why They Changed the Music

Two things you should know about me:

And there was a small but perfect storm of these in 1996, when the TV series High Incident first aired on ABC. Here are the original opening titles:

But then, after a few episodes—maybe even just one—the theme music changed to this:

I mean, it's not bad music per se. It just suffers in comparison, since the original was so energetic, and the replacement is so... emo, for lack of a better word. Maybe the producers wanted to set a more downbeat tone, but that's not how I remember the show.

And it was a good show. I still remember the last episode. Jesus, that was heartbreaking.

Anyway. Music. The same thing happened to Veronica Mars. Here's how that show opened for the first two seasons:

And then this happened in season three:

Once again, it's not a bad choice per se, but given how much personality and texture and just plain attitude the original Dandy Warhols song had, the "remix" doesn't hold a candle. And I believe deadening the opening titles like that contributed directly to the show's decline and eventual cancellation.

So here's my advice to any current or future showrunners: make sure you have a good theme song when you start, and don't change it unless you have a damned good reason. You can update the visuals as cast members change, or add revolving "tags" like The Simpsons (see below), but don't mess with the music. That is your foundation.

Those notes, those chords, those specific sounds are setting the mood for your show. More than that, they are signaling continuity. They tell the viewer that yes, this remains the awesome show you fell in love with ten or more seasons ago. Keep watching.

Worried that your theme song will sound hopelessly dated after a decade? Pick the right music and it won't be an issue. Herewith, a few exemplars.

I Have Watched the Entire First Season of "Betas"

And you know what? It's pretty good. I'll admit it: I even teared up a little during the finale. Sure, the payoff was a cheap shot at Zuckerberg (and shamelessly rode the long coattail of The Social Network), but setting it up and turning it around in just two episodes? That's some tight scripting.

The first three episodes are free to stream on Amazon (entire season available to Prime members). One and two are a bit shaky, but the snappy dialogue carried it for me. And honestly, if you're not sold by the time Avinash says "Aunties were involved" in episode three, I can't help you, man: 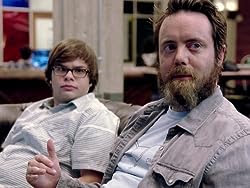 Also? It's fun to pretend that Ed Begley, Jr.'s "Murch" character is actually Henry Starling from VOY "Future's End." And hope that Sarah Silverman will show up at some point. Hey, a kid can dream.

Of coure, it's not perfect. My second biggest complaint is the aggressively indie theme song. My biggest gripe is the casual sexism that pervades the series.

To wit: I know comedy must always tread the Very Afterschool Special line carefully, but devoting an entire episode to "Crazy Misogynist Guy" becoming a meme and not actually addressing the issue is either irresponsible or head-in-the-sand myopic.

The most interesting and well-developed female character on "Betas" was written out after just four episodes, reducing the number of regular/recurring female characters by a full third. Kelen Coleman's guest shot as another startup CEO was a welcome change, but all too brief. And I would love to see another Mikki-centric episode that is actually about her job—you know, the premise of the series—and not her family issues.

(Aside: actress Margo Harshman made the most of a limited role, and I would love love love to see a spin-off about Lisa's adventures in Seattle. MAKE IT HAPPEN, AMAZON.)

Meanwhile, I'm still trying to figure out HBO's "Silicon Valley." I know Wired slobbered all over Mike Judge's geek cred, and some of the satire is spot-on (we'll leave aside the crass racism for now), but it's just not very... funny. And there is only one substantial female character on the show, who is just now—in episode five—starting to demonstrate any agency. Not cool.

I was a software engineer in the San Francisco Bay Area for over a decade. I worked at a startup where fully half the employees were women, and the company could not have survived without them. I don't want more shows where women don't matter, because that's not real life. And that's not the world I want to live in.