One month ago, I was fortunate enough to attend the Schrödinger Sessions II (SS2), a "science for science fiction writers" workshop at the University of Maryland (UMD), organized by the Joint Quantum Institute (JQI) and focusing on quantum physics. The workshop was free, including lodging in a UMD dormitory and breakfast and lunch every day, and it was totally worth paying for my travel there and back.

I first got interested in quantum mechanics (QM) back in high school, when I'd had enough math and science education to grasp how subatomic physics actually worked. Well, that's what I thought. Quantum phenomena are super weird, you guys. But they are incontrovertibly real, even if they seem non-intuitive; as several of our SS2 lecturers mentioned, QM is possibly the most well-tested experimental science, and the results are reproducible and undeniable. We don't know why the universe works this way, but we know that it does.

If you want to try deciphering my notes, here they are in one massive Google Doc.

This may actually be the best explanation of antimatter I have encountered to date. #jqi pic.twitter.com/zzxBDPs2nI

And here are some excerpts from others' blog posts:

"JQI is what they call low energy quantum mechanics. This involves quantum computation, low temperatures, superconductivity-- all of those sorts of things we can do in a relatively small lab. High energy quantum mechanics and physics, those things done at the Large Hadron Collider and supernovas, aren't done at JQI. That didn't prevent us from asking about it."
— Steven Popkes (day 2, day 3)

"And lest any of the participants leave the U Md (College Park) campus without their brain having exploded, we also covered -- bonus material -- some cosmological speculations and the recent first detection of gravitational waves."
— Ed Lerner

"FYI: Next year, 2017, JQI plans to offer a similar seminar for a different professoinal group, Physics for Journalists, and then, pending funding, re-offer this same session as I attended, Physics for Sci-Fi Writers, in the summer of 2018."
— Sally Ember (2, 3, 4, 5, 6)


BTW, the gravitational waves Ed mentions above were detected by the Laser Interferometer Gravitational-Wave Observatory (LIGO), which is pretty freakin' awesome. That evening lecture by Peter Shawhan was also where I learned about "squeezed light," and like most things during SS2—laser cooling, ultra-cold Bose-Einstein condensates, and quantum computing algorithms, to name just a few—it legitimately blew my mind.

Looking forward to more of this today. #jqi #staywoke pic.twitter.com/XUPYlJ6KcS

I am definitely, as one person put it, "confused at a higher level" now. And I'm glad to know that even trained physicists continue to argue about the philosophical interpretations of QM. Nothing out of SS2 directly informs anything I'm currently working on, but I look forward to seeing what my subconscious does with it after a few months or years.

OH: "Why don't you just use the variance of the two quadratures?" #jqi #LunchBreak

Some of the other awesome writers who attended SS2:
Apologies to anyone I've forgotten to mention. You're all fantastic and I'm glad I got to hang out with you for a few days!

On the way home from the workshop, Southwest cancelled my Saturday night flight (unclear whether due to weather or computer meltdown) and the earliest rebooking was Tuesday morning. Fortunately, my high school pal Tony lives in the area, so I was able to stay with him, catch up on the last eight years of our lives, check out the Udvar-Hazy Center, and also meet up with some DC area Sea Monkeys for lunch.

I received a mysterious postcard this week: 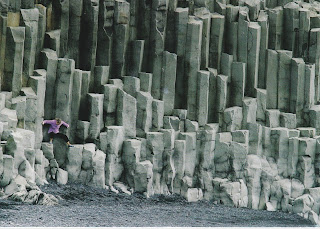 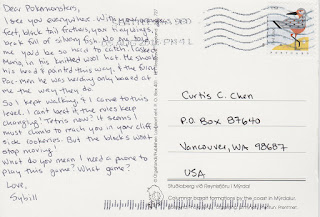 No obvious hidden messages jumped out at me from the text, but DeeAnn wisely pointed out that several different video games are mentioned or described. That's pretty interesting.

Without knowing where this might lead, I'm not very motivated to spend time trying to solve it... but I'm sharing it here in case somebody else out there wants to take a crack at it.

If you do figure something out, please leave a comment below! (I also don't care about spoilers.)

If you're going to Worldcon later this month, here's where you can find me:

...and I'll otherwise be wandering around, probably in search of barbecue and/or booze.

If you run into me at the con, ask for a "TEAM KANGAROO" ribbon to decorate your badge and show your support for the hapless hero of my debut novel Waypoint Kangaroo! 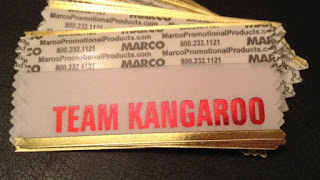 Last but not least, my friend, Clarion West classmate, and all-around awesome person Marlee Jane Ward is organizing a Karaoke Extravaganza on Thursday night. This is a private(ish) event, so if you're interested, message me on Facebook and I'll invite you!