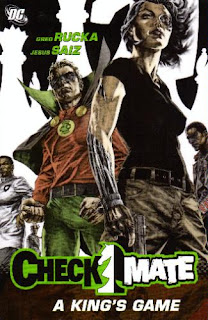 I was still in high school in 1988, when Action Comics #598 introduced Checkmate to the DC universe, and I remember being intrigued by the high-concept, high-tech James Bond riff. Unfortunately, the execution didn't quite live up to the promise--from what I remember, they were pretty run-of-the-mill espionage stories.

But like most things in mainstream comics, the fictional organization never really went away, and in 2006, writer Greg Rucka helped restart a monthly Checkmate title, one of the many repercussions of the Infinite Crisis/OMAC Project/52 continuity clusterfuck. (Don't get me started.)

The good news is, this second-variety Checkmate behaves much more like I imagine a real espionage outfit would, dealing with at least as much info-war intrigue, intramural rivalry, and personal politics as pistols-blazing action. Did I mention that I also devoured many John le Carré novels in high school?

Rucka portrays the Checkmate organization in very much the same way as SIS in his Queen & Country comics and novels (which itself was nearly a direct copy of The Sandbaggers). And that is a very good thing. The fact that this particular spy shop lives in a world populated by superheroes is almost secondary to the real drama.