It's that time of the year when writers blog about their award-eligible works published in the last calendar year. Well, I only had one work published in 2017: 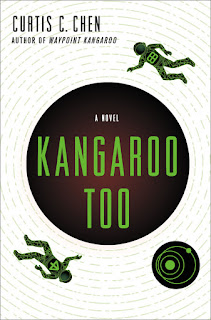 If you read and enjoyed Kangaroo Too, please talk it up anywhere and everywhere you like!

And now I'm going to direct your attention toward some other writers who have published outstanding fiction in 2017. In no particular order:


FULL DISCLOSURE: I have personal connections to all of the above writers through conventions, workshops, professional organizations, and/or living in the Pacific Northwest.

Check out Cat Rambo's 2017 roundup for a more complete list of award-eligible works.

And don't forget, if you want to nominate for next year's Hugo Awards, you need to buy your Worldcon membership by this coming SUNDAY, December 31st!

This coming weekend I'll be at OryCon, a science fiction/fantasy convention held annually in Portland since 1979. This year it's at the Red Lion Hotel on Jantzen Beach. When not at the bar, here's where you can find me (moderator for each session in bold): 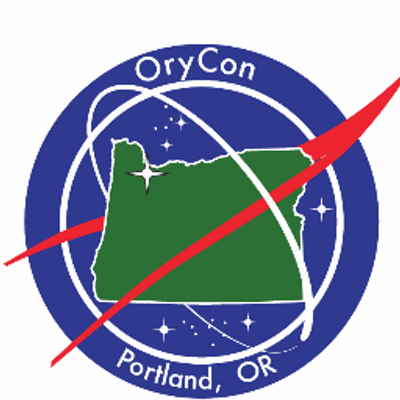 2:00pm-3:00pm
Getting Your First Professional Sale
Thrawn - 252
An author can struggle for months or years before achieving their first success, but even after writing their opus, they can be tripped up by a process which is both entirely new to them and yet critical to their success. This panel describes what an author may experience as they revel in their first success.
Clayton Callahan, Tina Connolly, Curtis C. Chen, Sheila Finch, Annie Bellet 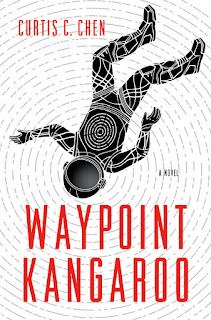 10:00am-11:00am
SFWA Regional Business Meeting
Thrawn - 252
The Secretary will give a briefing on the latest in SFWA and the business, as well as answer questions.
Curtis C. Chen, Jim Fiscus

12:00pm-1:00pm
Publishing Ethics
216 Presidential
What should the relationship between publishers and writers look like? Between writers and readers? Both require respect. What does that look like?
Patrick Swenson, Curtis C. Chen, Susan R. Matthews, Ann Gimpel, Doug Odell

8:00pm-9:00pm
Sci Fi Ask Me Another! (Quiz Show)
216 Presidential
Curtis Chen and Jeff Soesbe present a variety of games involving science fiction and fantasy trivia, puzzles, and wordplay. Audience participation is required, and rewarded! Can you make it to the final Elimination Game? Come have fun while competing for prizes!
Jeff Soesbe, Curtis C. Chen 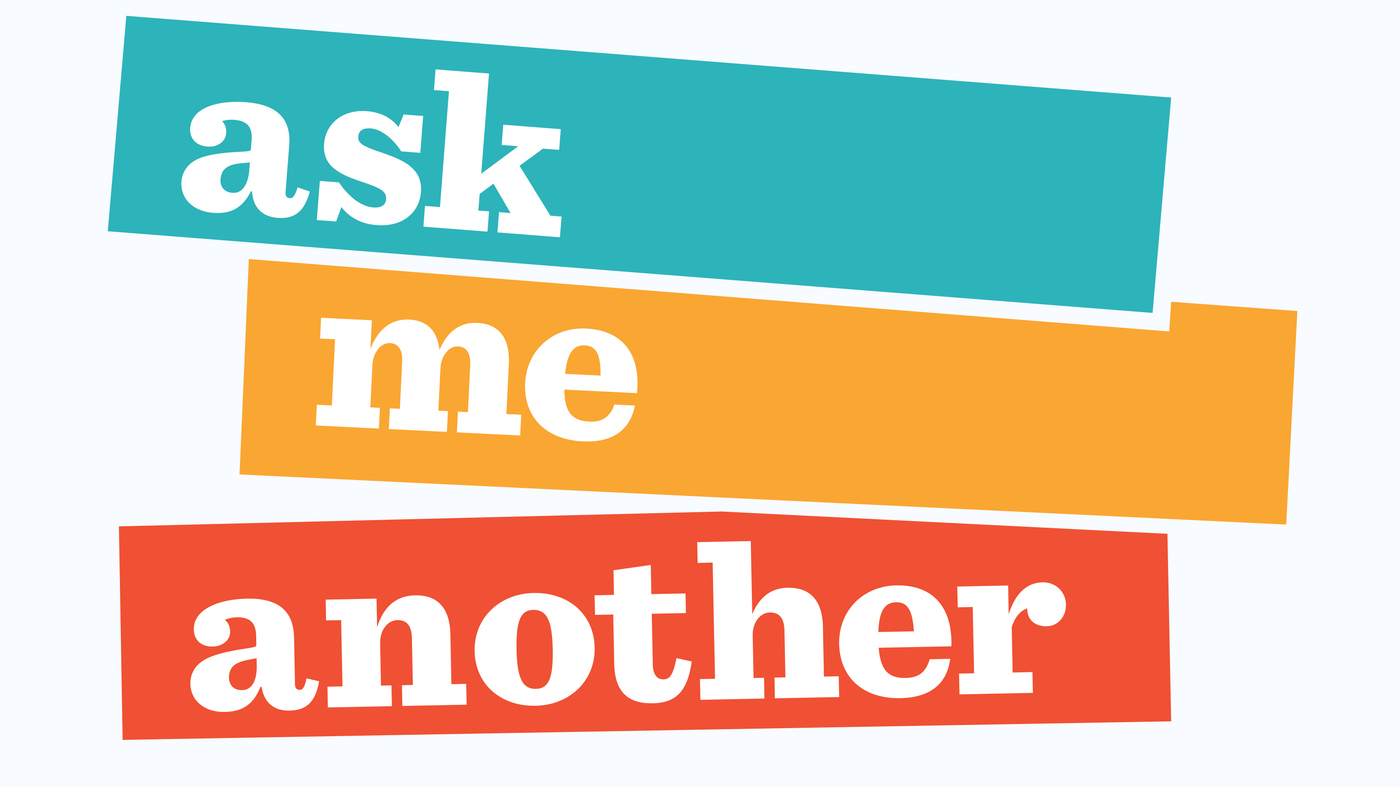 1:00pm-2:00pm
Trades versus Weeklies Economics
Wenatchee - 166 Parlor
Comic collections or issues? Why have one when we already have the other?
Robert B McMonigal, Eva L. Elasigue, Jeff Soesbe, Curtis C. Chen

Check out the full OryCon 39 schedule on SCHED. 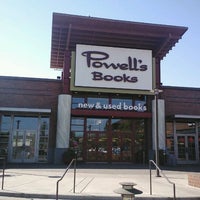 And if you can't make it to the con, I'll also be at Powell's "Sci-Fi Authorfest" in Beaverton on Sunday afternoon from 4:00pm to 5:30pm. Come meet 20 different speculative fiction authors, buy our books, and get them signed!

Next weekend (October 13-15) I'll be at Can*Con, the Conference on Canadian Content in Speculative Arts and Literature in Ottawa. And no, I am not Canadian, but they're letting me crash their party anyway. (Thanks to my literary agent Sam Morgan, last year's Agent GoH, for paving the way!)

Here's where I'll be:

9:00AM - Salon B
SFWA: Supports for Writers & Routes to Membership
An overview of the Science Fiction and Fantasy Writers of America (SFWA) with current and former Secretaries and our current Volunteer Coordinator. Light breakfast fare and coffee will be available!
Curtis C. Chen, Susan Forest, Derek Künsken

11:30-12:00 - Dealer's Room, Chapters Table
Signing Session
Titles will be available for sale by Chapters, but no purchase is necessary – feel free to bring something with you for us to sign!
Curtis C. Chen, Yves Meynard

13:30-13:45 - Salon B
Reading
A scene from KANGAROO TOO, and possibly something from the new work in progress!
Curtis C. Chen

2:00PM - Salon D
Leveling Up Your Writing with Formal Courses
Previous participants in courses like Clarion, Odyssey, Taos Toolbox, MFAs, etc. discuss (1) the benefits and drawbacks of residential vs. online writing courses, (2) how they got in, (3) what they learned there vs. other places to learn.
Curtis C. Chen, Suzanne Church, Timothy Gwyn, Leah MacLean-Evans, Kelly Robson (moderator)

P.S. Has it really been almost two months since my last blog post here? Maybe I ought to put up or shut up on this whole blogging thing. :P

There are lots of squirrels running around our apartment complex. Sometimes we throw peanuts out onto our back patio for them to eat. We try not to do it while they're watching, because we don't want them to get the idea that we're feeding them directly.

But lately there's this one squirrel who's been running around right outside our front door. We see him several times a week as we're leaving to go out, and he always runs up and stares at us like "whaddya got for me?"

He does run away when we get closer, but he still watches us like a little creeper. 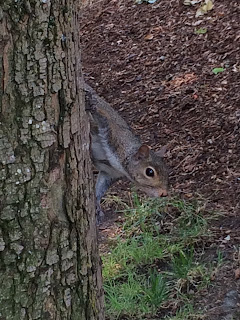 Today, when I left the house, I found this on top of our car. 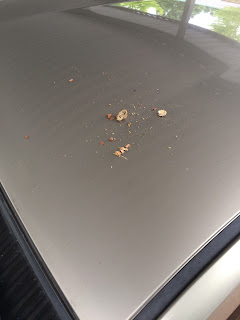 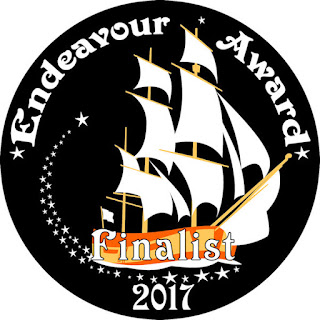 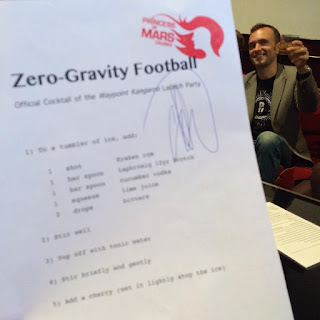 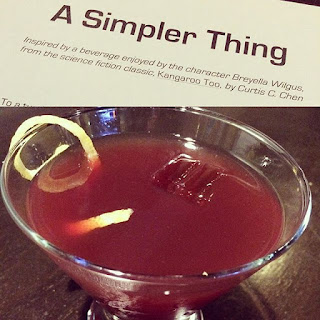 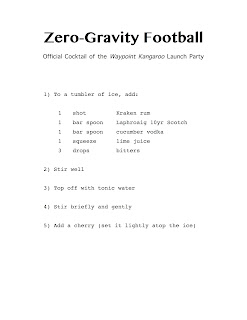 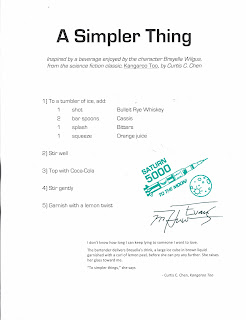 This pleasant surprise appeared in my inbox today (email truncated): 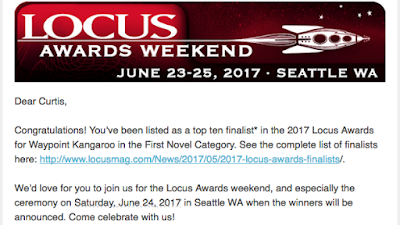 I'm flattered that enough people voted for Waypoint Kangaroo to put it in the top ten for the first novel category, and I'm honored to be listed alongside these outstanding works:


The Locus Awards Weekend is open to all (tickets are $60 each), and includes readings and workshops with the likes of Connie Willis and Carrie Vaughn. Will I see you in Seattle next month? Leave a comment and let me know!

Earlier today I realized that Norwescon is NEXT WEEK. Time to start making plans! Here's where you can find me at the con (other than the bar):

Write Your Elevator Pitch Workshop
Cascade 12
2–3 p.m.
Got a good elevator pitch for your manuscript? Whether you’re seeking an agent and traditional publisher, or planning to self-publish, you need to have an elevator pitch of your book. Loglines and elevator pitches are ways to explain your story/series and pique interest in your work in one or two sentences. This workshop will teach you how to condense your 90,000 word novel or 5 book series into a quick, effective elevator pitch. Ages 18+. Space is limited and advance sign-up is required in Cascade 1.
Curtis C. Chen (M)

What is a Story?
Cascade 9
3–4 p.m.
Writers talk about story, but what is it really? Something with a beginning, middle, and end? A witch’s brew of words and punctuation? Come discuss with our panelists what separates a coherent narrative from a random series of events.
Marta Murvosh (M), Cat Rambo, Curtis C. Chen, Nancy Kress, James C. Glass

Technical Sci-Fi
Cascade 11
1–2 p.m.
The balance between technical details and story are discussed as our panelists dive into the junction between being specific and still captivating the audience.
Curtis C. Chen (M), Dr. Rob Hoyt, John Cramer, PJ Manney

Singularity
Evergreen 3&4
4–5 p.m.
Join our panelists as they discuss the concept of the singularity, both as a scientific principle and an element in fiction.
Django Wexler (M), PJ Manney, Curtis C. Chen, John Cramer

First Page Idol
Cascade 9
5–6 p.m.
Feeling brave? Want to see how your first page holds up in a cold read? Send the first page of your manuscript to idol@norwescon.org to have it anonymously read aloud and critiqued by a panel of pros.
Curtis C. Chen (M), Wendy N. Wagner, Patrick Swenson, Mark Teppo

This year's Oscar nominations (honoring films released in 2016) were announced on January 24th, and ever since then I've been checking Oscars.org periodically to see if they've published the "view by film" tab on the nominations list. Several news outlets reported on the numbers of nominations different films received, but usually the Academy posts a full list of nominations for each film.

Well, that tab still hasn't appeared as of this writing, but on a whim, I back-hacked the URL based on last year's site, and you know what? The data's actually there. It doesn't appear to be fully cleaned up (the original song nominees are sorted incorrectly), but it's better than nothing:

However, I had already compiled my own list from the per-category nominations page, so I'm posting that information here for everyone else's handy reference. Please note that I'm only listing films with more than one nomination below. For everything else, please refer to the broke-ass page linked above.


If you're in the Portland, Oregon area, you're welcome to join us at our Oscar Party on February 26th. (Message me for details if you haven't already received an invite, and apologies for the oversight!)

Finally, everyone on the Internet is welcome to follow me on Twitter for #OscarTrivia that day. (Teaser: you'll find out which one of this year's nominees I worked with on a project back in 2011! Feel free to speculate in the comments.)

Long answer: Below is a list of all my currently scheduled author events and appearances in 2017. Bookmark curtiscchen.com/events for the most current details, and contact me if you'd like to invite me to something in your neck of the woods!