If you want to understand my wife, it might help to know that these are two of her favorite movies:

Backstory after the trailers.

First order of business: both of these films are much better than those trailers make them look. Seriously. I'm talking light-years. Zero Effect is a brilliant modern retelling of "A Scandal in Bohemia," and Mumford is honestly unclassifiable, but even though it covers a lot of different narrative territory, it never feels like it's all over the map; it simply feels inclusive.

And here's another fun bit of trivia: Mumford was directed by Lawrence Kasdan, and Zero Effect was directed by... Jake Kasdan. That's right, it's a father-and-son filmmakers double feature! (DID I JUST BLOW YOUR MIND? No? Okay. Moving on.)

A few years ago, I wanted to plan something special to celebrate DeeAnn's birthday, and I hit upon the idea of a day out centered around a private little film festival. This was also the year before we moved out of the Bay Area, so I thought it'd be a nice way to catch up with people we might not see again before we relocated.

Here's the invitation I sent to our friends: 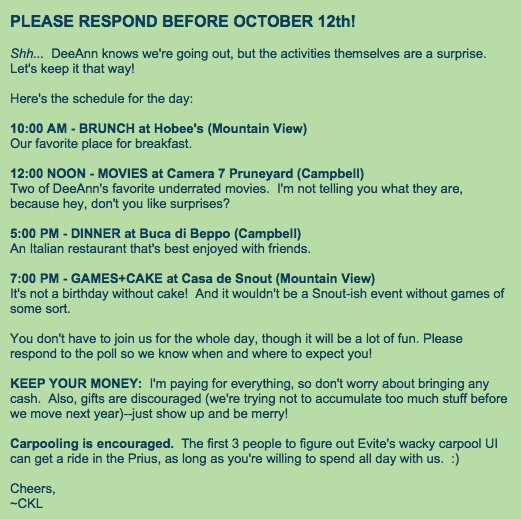 That day was, in fact, a whole lot of fun, and the private screening of Zero Effect and Mumford was pretty sweet. (I'm telling you: if I ever get rich someday, like GRRM rich, I'm totally going to buy a movie theatre.)

I was glad to be able to introduce these two movies to some people who hadn't seen them before, and happy to be able to experience them with DeeAnn again. She's very particular when it comes to comedies. She doesn't generally like broad schtick or outrageous physical stunts. She's more into offbeat dialogue, unusual relationships, and characters who feel real.

I've learned a lot about storytelling from watching movies and TV with DeeAnn—in particular, about how audiences want to connect with the people they see onscreen, and how that becomes easier if those characters seem like complete and authentic human beings. My writing (and, indeed, my life) is better now because of her.