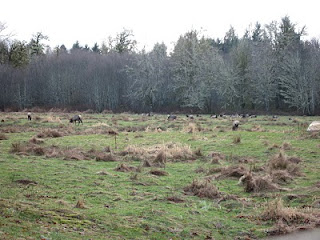 We had to drive a couple of miles down the road to find them, but there they were. One of them had antlers. 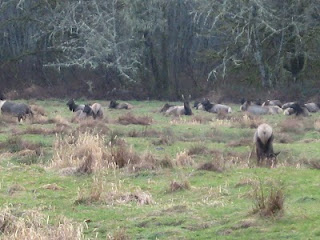 Also in that field: cats! Two of 'em. 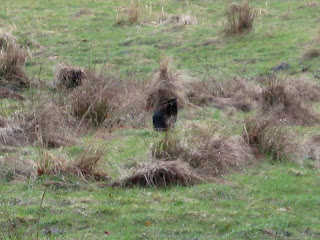 I know what you're thinking. Cats and elk, living together? Madness! Relax. It was only a temporary cohabitation, as the cats ran off shortly after they realized they had been seen. 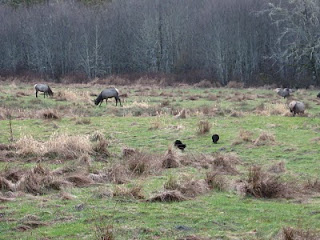 Also: still snow on the mountains. 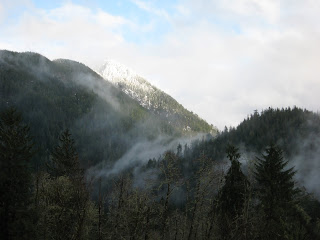 In writing news, DeeAnn and I missed Jennifer's morning talk on multitasking (today was our wedding anniversary--we slept in), but we enjoyed Kat's afternoon chat on "Voice and Inner Dialogue," which turned into a group discussion about the use of various points-of-view.

Tonight, the nice folks from University Bookstore set up shop in the lounge and sold us a couple of anthologies, which we got signed by their respective editors and some of the contributors. Then everyone watched a repeat performance of Mary's Little Tiny Puppet Show™. After that, talk inevitably turned to theater war stories and tales of animal penises.*

We finished our collaborative short story this morning, and a couple of people have asked to read the final draft. We've also been told to submit it to Clarkesworld first, since they publish a wide range of stories and are fast on the draw for rejections. So we'll see how that goes.

In any case, DeeAnn and I both enjoyed the collaboration process, and are already talking about the next story we'll write together. I love my wife!

* "Tales of Animal Penises" is the name of my Bloodhound Gang cover band.