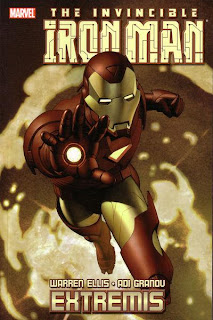 Much has been made of the quality of the artwork in this book, but let's be clear about something: if you pick up a comic written by Warren Ellis, chances are you're going to enjoy the ride--every goddamn insane panel of it. (Except maybe that part when he goes on way too long about using drugs. I admit I'm not the target audience for that, but still. Talk about bringing the story to a screeching halt.)

British artist Adi Granov produces his first rough sketches digitally, and it shows; the characters look like posed 3-D mannequins, which gives their bodies perfect size and proportions but can leech some of the emotion out of them. It only really bothered me in a few instances, and overall the consistency and added realism was a plus.

The story itself is pretty standard, and serves mostly to explain how Tony Stark acquired that crazy Extremis suit--which, admittedly, is not as crazy as what comes next, but it's still pretty crazy.