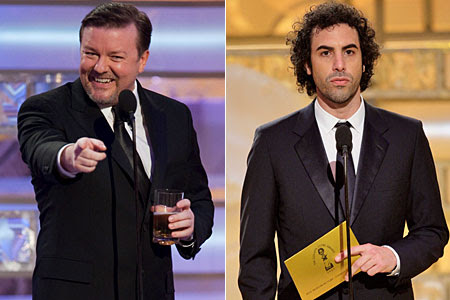 "Boos and booze for Cohen and Gervais at Golden Globes," Metro (UK)

"So Kate Winslet's got two Golden Globes. And hey, she also won a couple of awards tonight. Oh, what? It's true!"

I can only imagine what else Ricky Gervais might have said, if his beer-in-hand stand-up routine had come just a little bit later in Sunday night's Golden Globe Awards telecast. He certainly couldn't have done worse than Sacha Baron Cohen, who even had Sandra Bullock shaking her head at Borat's limp, not-ready-for-the-Catskills act. The old saying is true: "Dying is easy. Comedy is hard."

As for the awards themselves, I'm pretty happy that Slumdog Millionaire (trailer above) took home the big prize. D and I saw it last week, and it's every bit as good as everyone's been telling you. And if no one else has told you, I am. Go see it. If you have to drive an hour each way and pay for a babysitter, go see it. It just won't be the same on a small screen.

Slumdog makes a lot of noise about destiny, but the theme I saw was more what murder police have known for years: "It's good to be good; it's better to be lucky." That, and you make your own luck by recognizing and seizing opportunities. Life is bigger than any of us, but we're not powerless.

Also, I was amused at how Anil Kapoor, playing the game show host, kept pronouncing "millionaire" like "milliner." Yes! I would like to make fine hats for ladies and gentlemen!

Now I'm off to add Danny Boyle's Millions to my Netflix queue, and see if the Slumdog soundtrack album is any good.