One of the many reasons I loved Star Trek: The Next Generation was its art direction and set design--in particular, the signage. Here are a few examples, courtesy of Ex Astris Scientia: 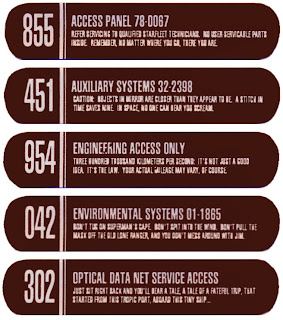 Of course, the text shown on these signs consists of various jokes, including song lyrics and references to other TV shows and movies. But in the world of the series, I love the idea that everything on the Enterprise-D was clearly labeled, and even a new crew member would be able to easily find what they were looking for by checking a map, asking the computer, and/or reading signs.

In the bachelor pad apartment I had right after college (which I shared for a time with this roommate), I made my own paper-and-tape signs for a lot of things. I labeled which switch was the light and which was the fan in the bathroom; I labeled what that one random switch on the wall by the kitchen did; I even put a sign on the bottom of the toilet seat cover to remind guests to put the lid down after using it.* And in our current home, we have signs showing where the trash and recycling bins are in the kitchen. (Some guests still get confused, but that's another story.)

Why so many signs? Because each label I can read is information I don't have to remember. We can debate about whether it takes more mental effort to read a couple of words than to recall the same fact, but the point is, I'm used to reading signs. Reading signs and interpreting their meaning is how I survive in the world. I'm doing it several times a minute while I drive, I do it every time I look for the restroom in a new bar or restaurant, and basic literacy is a requirement for using Twitter. Signage is civilization.

More than that, signage is inclusive. Putting up a sign is an implicit welcome to people who aren't intimately familiar with the culture of your place, who may not understand all the "unwritten rules" or traditional etiquette. Posting a sign means you acknowledge that the people who visit may not have studied the complete local history before stopping by--and that's okay.

I don't like not knowing the rules when I meet people or go to a new place. I don't like people not telling me the rules but acting like I should know them anyway. You don't want people in your club? Fine. Just make it clear that it's a private thing. Don't be a dick by pretending like anyone can come in, then treating the uninitiated like they're second class citizens. Everyone was a newbie once, and of course nobody's going to know what your rules are if you don't make the rulebook available.

Maybe it makes you feel more important if you have the power to make other people feel bad. And maybe you'll eventually alienate so many people that they go away and make a bigger, better organization without you, and you become the underprivileged. At which point you'd better hope those unwashed masses don't hold a grudge.

So that's why I like signs, I like FAQs, I always look for the "about" page when visiting a new web site, and I always read the fine print. Because even if you were pressured by threat of legal action to put it there, even if it's written in dense legalese, and even if most of it is boilerplate, it's inviting me to learn about you. And that's a friendly gesture.

* Closing the lid entirely bypasses the inane "leave the seat up or down?" question that often divides women and men. It also prevents pets and small children from accidentally falling into the bowl.