This is My Enterprise 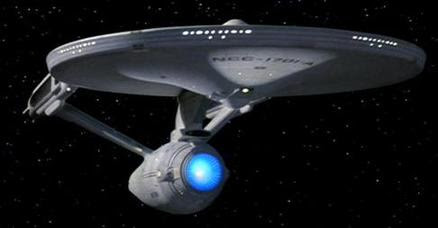 Image from Wikipedia
United Federation of Planets, Starfleet, Constitution-class heavy cruiser refit, launched in 2273. This is the first starship I truly loved. This is my Enterprise.*

I was born four years after TOS went off the air (personal trivia: though I fastidiously searched out reruns, I didn't actually see "The Trouble with Tribbles" until years after I'd seen every other episode of the original seventy-nine). I'm sure I saw TMP when it opened, but the one that stuck with me was Wrath of Khan. Those red uniforms, the James Horner score, all the visual effects (especially the nebula sequence), and the production design (especially the starships)--that was my Trek.

Image from The Star Trek LCARS Blueprints Database
There was more to come, but it would only succeed, not replace. I loved TNG; it was the first Trek I actually watched on television as it aired (I also missed TAS, for obvious reasons), starting in my first year of high school and ending in my junior year of college--but not really, because there was still DSN and then VOY, providing a solid fourteen years of continuity. (We're not going to talk about ENT. Just... no. But wow, apparently I was a really cranky blogger back in the early 2000s.)

I grew up with TNG, and Trek grew alongside me. I loved the expanded universe we got to see through those interconnected series, but it was a different aesthetic than the previous adventures, which had been all about one ship and one crew. I'll never forget seeing Khan when I was nine years old, being totally freaked out by the Ceti eels, not really understanding that Spock was dead (and allowing my father to convince me, on the way home from the movie, that my favorite character was "just unconscious"), and regardless of everything, wanting to live in that world, on that starship.

Image from BoardGameGeek
Different things about later Treks would captivate me--the insane detail of the TNG writers' tech manual (a photocopied version of which I found for sale at a convention), Picard's gravitas, Data's fine-tuned humor, DSN's sprawling politics, the EMH's sarcastic wit--but nothing caught my eye quite like the look of that TOS-movie-era Enterprise. And it still makes me nostalgic for that time, when I was also deep into comics and enthralled by the brazen narrative of the 1980s DC Trek books, which danced around canon and told unforgettable stories (go find a copy of The Mirror Universe Saga and tell me I'm wrong).

Even now, when someone utters the word "starship," or when I'm doodling in my notebook, the first image that comes to mind is from Star Trek. But it's not the classic TOS model, or the revolutionary Enterprise-D** (and certainly not the Abramsverse oddity). It's the NCC-1701-A refit, and it always will be.

This is my Enterprise. 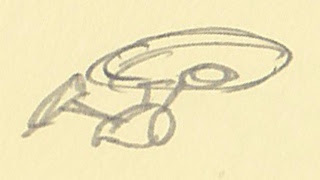 * Nitpickers will note that the images here actually depict the Enterprise-A, technically a different vessel--either the Ti-Ho or the Yorktown, depending on which non-canon source you believe--which Starfleet renamed to replace the ship destroyed toward the end of Search for Spock. But it's the exact same model, and just about everyone now uses the "A" designation to distinguish this design from the TOS Enterprise. Get over it.

** By the way, I can still tell at a glance whether I'm looking at the original six-foot model or the smaller, four-foot model built later to make motion control shots easier. I am a huge fucking nerd, and I'm okay with that.

Wow. This is incredible writing. Haven't read something that made me feel this much what the author was feeling in a long time. This is your calling C. Thanks for writing it.

Thanks! Good to know you're still reading. :)