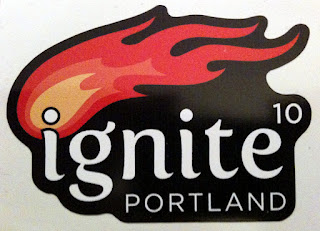 Last night, I gave a presentation on "A Homebrew Cat Feeding Robot" at Ignite Portland 10. It was very well received. In fact, depending on who you ask, I achieved one of the following:
Thanks again to everyone on Twitter who gave positive feedback!*

Now I'd like to talk about the "brought the house down" moment, which was as gratifying as it was surprising--to me, anyway. (This is your cue to TL;DR.)

I did not expect this particular slide, a graph of our cats' weights during 2011, to get such a huge response. I knew I found it amusing, but it was one of the last slides I'd created, almost as an afterthought: 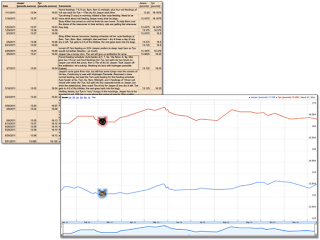 Our friend Richard suggested that after all the stories I'd been telling about the cats and their auto-feeder, this image simply nudged me "over the top" in terms of hilarity. (DeeAnn actually, literally wept with laughter. That reaction may have made me the happiest of all. I mean, I like all y'all, but I love my wife.)

Does this somewhat unwitting success mean that I've attained "unconscious competence"--i.e., that a particular skill has become second nature to me? I don't know. That seems a bit presumptuous after a single performance that went well. But it is encouraging. No less than six people came up to me after my talk and complimented me in person. That's huge, especially when you consider that this wasn't a traditional "show"--this was a bunch of geeks getting together to share their crazy ideas in five-minute chunks. I hadn't expected to connect so strongly with the audience.

I'm not lingering on this to crow over my triumph**, or stroke my own ego; I am honestly trying to figure out how I did so well. Because this has a bearing on other skills I'm working to develop and hoping to make a living with. To wit, writing fiction. (Making puzzle hunts is a distant, pie-in-the-sky second--as far as I can tell, nobody has ever succeeded in turning our particular type of events into a viable, consumer-driven business.)

At the moment, the only thing I can identify as a contributing factor is the thing everyone already tells you to do: practice. Put in the hours, do the work, keep doing it until you improve, and then do it some more.

I directed a lot of focused effort into the five minutes I did at Ignite, and that was backed by many years of experience giving presentations and performing in front of an audience. It's going to take a lot longer before I have the same kind of handle on fiction writing--which, if not a more complicated undertaking, certainly comes with less immediate feedback. I think of it as the difference between driving a car and making a car. A lot more work needs to go into the latter, because you can't make adjustments on the fly, as you can in the former situation.

Automation is hard. I guess that was the main point of last night's talk. But it is doable, and anyone can figure it out, if you're motivated and persistent. 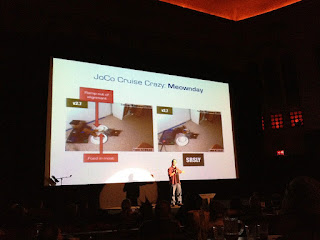 Yours was my favorite talk of the evening, Curtis. In addition to the reasons you mentioned I'd add the following: 1. The topic is universally appealing. Even if a person doesn't like cats, everyone understand the conundrum and wishes they could provide the kind of solution you did. 2. It's a great story of problem solving in which the solution didn't come quickly or easily. We felt your pain. 3. You didn't just tell us about the various hiccups along the way; you documented them in photos. Thanks for a fantastic presentation.

I was hoping it was going to end with a heroic Mars Rover-ish remote debugging story, but the weight chart came out of nowhere and was awesome.

Don't be surprised you did so well--yours will be one of the ones I recommend people watch if they couldn't make it and I genuinely enjoyed watching every minute of yours. It was thorough, well-documented, told with the right touch of sarcasm and exasperation, and plain amusing. Also, in case you didn't notice, cats are totally in!

I really enjoyed your talk. I'm pretty sure the graph at the end wouldn't have gotten as big a laugh if it didn't have the cat-face icons on it. (I can't explain why, but they seem to make it funnier.)

I'm sure that part of the reason I was so amused by that graph is that I had a similarly detailed spreadsheet for one of my cats for awhile (not to mention having done one with graph for myself at one time). But it seems unlikely that everyone in the audience who found that funny has similar spreasheets in their closet ... doesn't it?