I am a Prize-Winning Screenwriter

Against my own expectations, I appear to have won an actual writing competition: 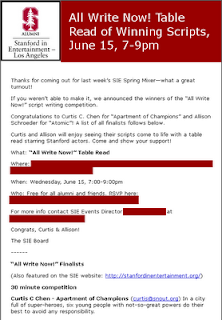 Since this is probably the closest I'll ever come to actually getting this show produced, I am definitely going to attend the table read next month. I just sent off a character breakdown sheet for the director, which was yet another new and exciting thing for me. w00t!

And since this blog post is probably the closest I'll ever come to making an acceptance speech at an awards show, here's the long list of people who helped make this script even possible:
In other good news, speaking of DeeAnn, she's just picked up a six-week consulting gig. It'll pay very well, but she'll be down in the Bay Area for at least the next couple of weeks.

That's okay. We always expected to travel: we selected our current housing situation because it's less than fifteen minutes from PDX airport. We always miss being away from our home and our cats, but we love seeing the rest of the world, too.