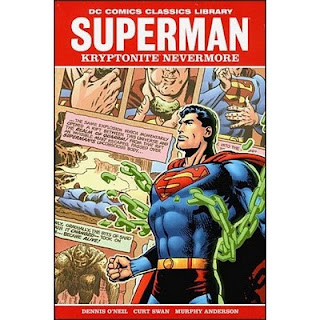 This collection of Superman comics from the early 1970s epitomizes many of the things that were wrong with the Silver Age (and continues to be wrong with Smallville on TV--but that's another post).

I mean, come on. I'm used to comic book writers hand-waving a lot of science, or even inventing their own, but when you don't even try to explain the principles behind a dimensional rift... the science fiction fan in me rebels at such liberties.

I'm not even going to talk about the ethnic and other stereotypes, which were pretty much par for the course back in the day. My biggest problem is the poorly written dialogue, especially major expository lumps containing outrageous claims for which nobody ever demands proof. It's pulpy to the extreme, which is not a bad thing per se, but pulp without engaging characters eventually becomes either repetitive, absurd, or both.

One last thing: Considering the events of Final Crisis in 2008, it's odd to see Darkseid mentioned here in such a lightweight context. Times sure have changed.