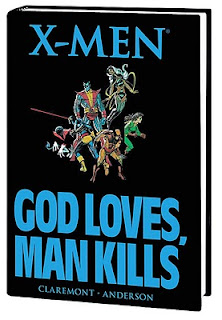 For something that's supposed to be a cornerstone of contemporary comics, I wasn't hugely impressed by this graphic novel. For one thing, despite a large cast of characters, they're all surprisingly arc-free, and navigating their relationships depends on the reader knowing a fair bit about the Marvel universe going in.

Some of the writing--for example, describing a bodega as "a Spanish delicatessen"--is laughably quaint. Not to mention talky, and preachy, and melodramatic. But I suppose that was all par for the course in 1982, when this was first published. And it is an interesting historical document, if not the holy text that its authors make it out to be in the endless interviews packed into this hardcover edition.

This is not actually a negative review. God Loves, Man Kills still has some relevance, and it's interesting to see in it where many of the ideas for the first two X-Men movies came from.