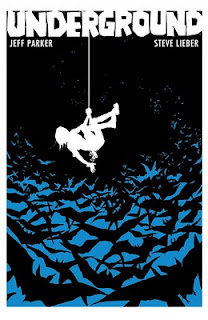 This one may be hard to find in your neck of the woods, but it's worth the effort. Calling it "Die Hard in a cave" is mostly accurate but entirely untrue to the spirit of the thing. More on that later.

I knew about this book, and wanted to read it, but hadn't planned to pick it up so soon. As luck would have it, I stopped by Things From Another World last night for their "Avengers Day party," which featured a Q&A with Brian Michael Bendis and Jeff Parker... 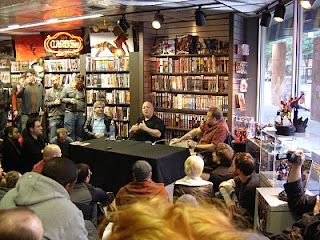 ...and while waiting for the event to start, I browsed the shelves and saw Underground on a "local creators" display. I'd brought my Powers hardcover for Bendis to sign, and figured I should pick up one of Parker's books, too.

Best decision I've made all week. Steve Lieber was also there to hear Bendis, and was gracious enough to sign a few books himself. So I got my copy of Underground inscribed by both creators: 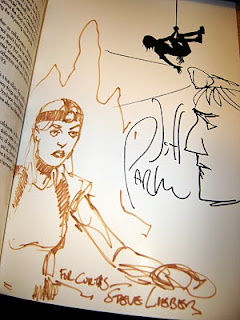 In his afterword, Parker lays out some of their goals for this story, beyond simply writing a thriller set inside a cave. I won't recount those goals here, as some may be considered spoilers, but they were both admirable to begin with and achieved well in the finished book. Ask for it by name at your local comic shop.