This year, D and I switched from hand-writing all our holiday cards to drop-shipping pre-printed postcards. It forced us to write more concisely about the past year, but we're very happy with the results: 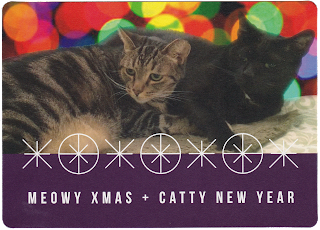 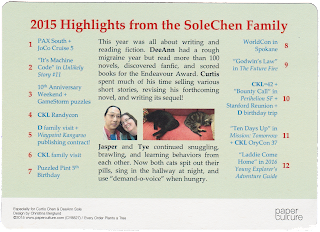 If you wanted a card from us but didn't get one, we apologize! Please send us your current mailing address and we'll make sure you're on the list for next year.

Tonight, starting at 9:30 PM Pacific Time, you're invited to our first ever...

Search for #DieHardEve on Twitter to see commentary from various Portlandians, including:
...and you, dear viewer, are also invited to contribute! Feel free to jump in using the hashtag #DieHardEve if you get inspired at any point.


IMPORTANT: you're responsible for synchronizing your own viewing! If you don't own the movie, here's where you can rent it online—looks like the going price is $3 (make sure to verify rental terms and whether it's HD, if you care about that):

Meanwhile, please enjoy this artifact from the 1980s:

And here's a scientific carol for you:

I Am Eligible for Some Awards or Something

Hello, readers! I know, it's been a while since I actually wrote one of these Wednesday blog posts. I've been working on other writing projects lately (like my first novel) and have also started an author newsletter which will eventually be archived on my other, theoretically more professional web site. (Stop laughing.) But for now, I'm still pushing some content into this space.

So we're coming to the end of 2015, and writers are starting to post lists of their award-eligible works. Nominations for the Nebulas are open, the battle for next year's Hugos looms on the horizon, and I'm sure there are other honors to be won by works more worthy than mine.

Please note, this isn't me projecting some false modesty in an attempt to reverse-psychology you into nominating me; I have personally read more interesting, more groundbreaking, and more well-wrought tales than the ones I got published this year. I've worked pretty hard and I'm happy that my stories are finding homes. But my stuff isn't award-worthy when compared to the whole wide world. I wouldn't vote for me, and neither should you.

So, for your consideration, here's a short list of genre fiction writers who had eligible works published in 2015. Even if you don't plan to nominate, please go read their stuff, because it's good:


For my own bookkeeping purposes, here are my publications from calendar year 2015. Online stories are linked directly; print stories link to the anthologies in which they appear:


For the record, most of those stories started out as 512 Words or Fewer flash pieces, and one of them was originally part of my application for Clarion UCSD (I didn't get in). But this is one of the most important things I've learned in the last decade or so: not everything I write is for publication. In fact, probably most of it isn't. But it all counts.

A lot of the words in my early drafts get revised out of the final manuscripts. Sometimes I write things for exercises or workshops or classes, and some of those could be turned into full stories, but the majority of them are just for practice or demonstration. It's okay that they'll never make it "into print." That wasn't their purpose. It's like going to the gym, or practicing a musical instrument, or rehearsing a live performance: you don't always do it for an audience; you do it to prepare and to improve.

There are countless people—professional authors included—who spend innumerable hours writing fan fiction which can never be published. They're doing it for love, and whether intentionally or not, they're also sharpening their skills at storytelling. And that is a great way to develop those muscles (so-called): thinking about characters you love, whether or not you created them and the world they inhabit, and doing your best to give them the tribulations and triumphs they deserve.