I am on a Boat

And I regret nothing.

Speaking of games, have you seen The Doubleclicks' latest music video? It's pretty awesome.

Finally: just let it go, everyone.

This week, we talk to Erin Rhode, leader of the writing team ("Alice Shrugged") for the 2014 MIT Mystery Hunt. See also: Erin's Q&A from the recent GC Summit!

I Less Than Three Portland

(Today's "The I in MEAT" blog post is brought to you by the perfect texture, The Doubleclicks, and the Twitter.)

Back in 2007, DeeAnn and I went all in on what we called "the writer move." In particular, we decided to stretch our savings by moving out of the San Francisco Bay Area to a more affordable city--meaning we had most of North America to choose from.

Some places we ruled out right away, for various reasons. Seattle was also too expensive (and still is). Canada would require proof of rabies vaccination for our cats, which in itself wasn't a problem, but we didn't want to risk losing them to international quarantine or for some other obscure medical reason. And flying the cats anywhere also seemed like asking for trouble. But that still left forty-eight of the United States to choose from.

To narrow down the wide field of candidates, we created a big spreadsheet and researched data which were important to our lifestyle. Some of those properties included:


Here's a link to the full spreadsheet, if you're curious about the details. Note that we gathered this data seven years ago, and much of it will be out of date now: 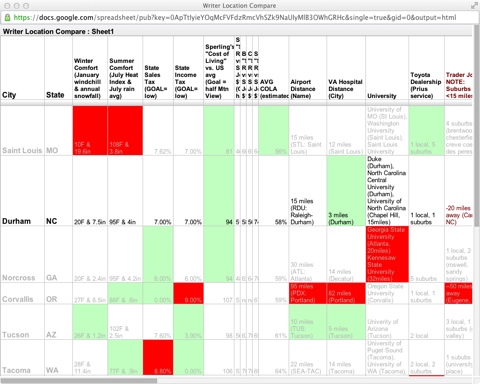 We took trips to visit our top two out-of-state candidate cities, shown in black text on that spreadsheet: Cary, North Carolina (in the Research Triangle) and Portland, Oregon. (Our fallback was Sacramento, California, which area we were already familiar with from all our Hogwarts Game scouting in 2006.) Cary had a fantastic farmer's market, but the neighborhoods weren't remotely walkable. And Portland... well, we live here now.

It took us a little while to adjust, but now we couldn't be happier with our home. (And no, I am not saying that ironically.) The move also inspired me to ask for 37 Postcards back in 2010, and that was pretty amazing, too.

If you're thinking about relocating, and you have some latitude in your selection criteria, Internet research is an excellent place to start. We started with information from Sperling's Best Places, then supplemented and corroborated that with data from various other online sources which we judged reliable and relevant. Your mileage may vary. 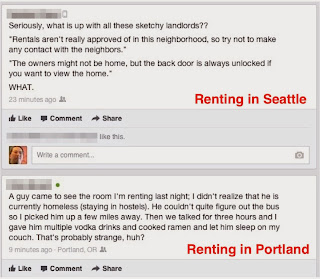 Ladies and gentlemen, the Pacific Northwest.

I Dream of Google

Three things you should know about me:
And I have only ever dreamed about one of those things. (I guess that's actually four things. Nobody expects the Spanish Inquisition!)

I worked at Google for a little over four years. Yes, I started before the IPO; yes, I had stock options; yes, I was a paper millionaire for, like, two seconds before I had to pay the taxes. I'm not rich, and I haven't retired (unless you count moving to Portlandia).

The first two years were the best. I started when the company only had about a thousand employees. I was hired into a team of four people--I was the fourth--to build internal tools for the Online Sales and Operations division (Sheryl Sandberg's group, for what it's worth; I saw her pretty regularly around the building, and briefly met her at an internal book club meeting once, but even then, she had no idea who I was).

When I dream about being at Google, I dream about the good things. The intelligent and passionate people there. The opportunities to solve interesting problems. And, of course, the various free and subsidized personal services, which helped keep employees "on campus" as much as possible, to maximize the potential for unplanned collaboration (and exempt overtime). All the crazy perks depicted in that movie The Internship? All true, and not half of what was available when I was there. Who knows what else they've added since then.

There were a lot of good things that would have kept me at Google, but in the end, I had to move on.

By the time I left, in early 2008, the company employed well over ten thousand people worldwide. My team had grown by an order of magnitude and was on the brink of being politicked out of existence. I won't go into details, but suffice it to say that even though Google may be the best workplace in the modern world, it is still a commercial corporation: a machine built to produce profit. It's a big company. And no organization grows to that size without picking up a few parasites along the way.

Those last two years were, to be sure, still better than the year I spent at my previous employer, working with one of the worst managers I have ever endured. But since I can make the comparison, I have to say that it may--may--be better to struggle against incompetence than to fight active malign intent. Easier, in any case. No villain ever thinks he's the bad guy, and when he has more powerful allies than you do, the battles can be very discouraging.

I stopped fighting, at some point, because I simply didn't know why I was bothering to do it any more. I had come to Google with the romantic notion that it would be the last place I ever worked--how could any workplace ever get better than this?--and that's probably why it hurt so much when the truth of it slapped me in the face, metaphorically.

I didn't belong there. I didn't want to work for a big company. I didn't want to work for any company, really. Even though I appreciated all the support systems offered by the organization--the free food, the flexible work hours, the on-site massages--and even though I still believed in the cause, I simply couldn't stay after having seen how ruthlessly some would pursue a brass ring. I would always be wary of being betrayed again.

Maybe I was lucky. Maybe it's a good thing that I learned, before I turned forty, that I was not fitted to be a salaryman. Maybe it's better that I moved away from the endless one-upmanship of Silicon Valley.

Maybe I'm happier now than I would have been otherwise.

Sometimes, at night, I dream about being back at Google. But I always wake up.