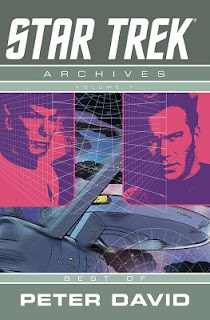 This was an "impulse buy" at the library, found while browsing the comic books (which always appear to be shelved in the "teen" section, unless they're black-and-white indie titles--but that's another topic).

I think I actually own most of the original issues collected here, but this was much more convenient than digging through my parents' garage. The first story is the best; it's commonly known within Trek fandom as "Scotty's Story," and it is an unabashed tearjerker. Some say that Trek is best when it's not being Trek--i.e., when it's not telling a straight science fiction story, but simply using the setting as a backdrop and mining the well-established characters and relationships for drama--and this is a perfect example.

The other two stories in this collection are okay, but not great. The "Worthy" three-parter, co-written by Bill Mumy, strains credibility and falls pretty flat if you don't pick up on all the Lost in Space references. "Once a Hero" does a decent job of dramatizing the plight of the redshirt, but the TNG episode "Lower Decks" did it much better.