And I have been thinking about it probably too much, thanks to this sidebar from the August 15th issue of Entertainment Weekly (click for larger version):

Yeah, I know, that's pretty tongue-in-cheek. The online article "Would all-girls 'Ghostbusters' be a stealth 'Bridesmaids' sequel?" goes into a little more actual detail (though come on, EW, it's "women," not "girls") on the Ghostbusters thing, which is all very preliminary.

But here's the one that really got me going: 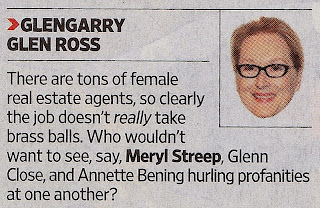 YES. FUCK YEAH. SRSLY. It's been thirty years since David Mamet won a Pulitzer for the stage play, and there have already been two different Broadway revivals of Glengarry, both featuring all-male casts (as written). Isn't it time someone tried doing something more daring with the material?

Approach it like Shakespeare. See what happens when you change the gender behind the same exact words. Mamet's hyper-masculine dialogue is so stylized that it already verges on satire. What does it look like when it's women spouting those profanities, swaggering around the stage with those attitudes, fighting tooth and nail for that modicum of status? That, I would argue, is more interesting and relevant than putting another group of angry men in the center ring.

And apart from a few gender-specific pronouns, you wouldn't have to change a single line of dialogue. Not even the character names. Ricky Roma, Shelly Levene, George Aaronow? Those could all be women's names. "John" Williamson and "Dave" Moss are more of a stretch, but those could be ironic nicknames. How's that for adding subtext?

Really, though, I just want to see Tina Fey let loose and fucking own the "coffee's for closers" bit:

(Before you nitpick: yes, I know that scene was written for the movie and doesn't appear in the stage play. But it's spawned such a strong pop culture catchphrase, I would argue you couldn't leave it out of any filmed version now.)

So who's in your dream cast for an all-female Glengarry? Leave a comment below!