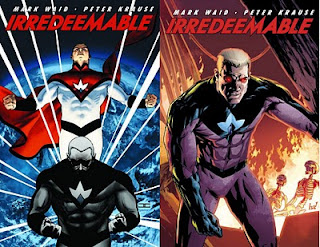 There are very few comics books I actually purchase in monthly "pamphlet" form, because twenty-some pages just isn't enough story in most cases. And my wife generally isn't interested in a title unless she can get it in collected trade paperback form.

In the case of Irredeemable, even the collections aren't long enough. Only four issues? Are you kidding me here? I really like the story so far, but I'm glad I can get these from the library instead of paying $12 a pop--and that'd be after the Amazon discount. Cover price is $17, or $4.25 an issue. Seriously?

Anyway. Irredeemable is writer Mark Waid's answer to the question: "How does a man go from being the world’s greatest superhero to its greatest supervillain?" He's stated in interviews that as he sees it, "[in] superhero comics, pretty much everyone who’s called upon to put on a cape is, at heart, emotionally equipped for the job." And this is his idea of what might happen if, basically, Superman went truly and completely psycho.

It's a pretty gripping yarn so far, but we'll see how it shakes out after the flashbacks catch up with the real-time narrative.