I Followed the Oregon Trail to Find Terry, Who Apparently Has Very Poor Impulse Control

A few days ago, I noticed several of my Twitter-friends retweeting this:

You meet a man on the Oregon Trail. His name is Terry. You tell him: “Thats a girl’s name!” Terry shoots you You have died of dissin Terry

At the time, that post had already garnered well over 500 retweets. But looking through the same account's other tweets, this one didn't quite fit. No disrespect to Jimmy, but it clearly wasn't his voice. Had he heard the joke from someone else?

It's not uncommon for bons mots to appear on the Internet without proper attribution. And in most cases, it's not important who coined a particular turn of phrase or who first photoshopped a particular meme—but it is interesting, to me anyway.

And so, as I have done in the past, I started a research spiral to see if I could identify the original wit. (Spoiler alert: I did.)

First, I went for the low-hanging fruit: previous tweets that included the same joke (I focused on the pun "dissin' Terry"). And I was able to find three independent posts, the earliest from February of 2011—over three years ago.

‎"You meet a man on the Oregon Trail named Terry.. You laugh “That’s a girl’s name!” Terry shoots you. You have died of dissin’ Terry."

You have died of dissin' Terry.

You have died of dissing Terry: http://nbyt.es/fiMUCj

(Note that the two older tweets don't introduce the full context of the Oregon Trail video game, and the link in the 2011 tweet is now defunct.)

That was the end of the trail, so to speak, until I tried a full-web search on "dissing Terry" (no contraction). And that led me to the jackpot—the "Terry made it to Oregon" installment of webcomic Hello With Cheese, published by Darren J. Gendron and Obsidian Abnormal on November 1st, 2010: 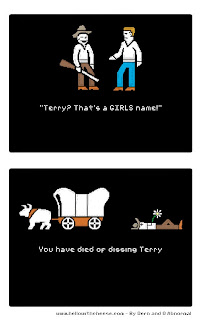 http://www.dernwerks.com/HWC/?p=1074
(For the sake of completeness, here's the chain that got me there: a Google search for "dissing Terry" turned up an archived post on webcomictweets.com, which linked to a t-shirt that no longer exists on Swag Shark. But even though the product web page returned a 404, searching for the URL itself turned up a backlink on Dern's tumblr, which in turn pointed me back to dernwerks.com, where I was able to track down the original comic and get more details about its creators.)

So why did a random tweet from a high school student in Texas get so much traction on Twitter, when the original piece—created three and a half years ago by an accomplished creative duo—didn't? Who knows. The Internet is as the Internet does. Memes are random and unpredictable. It's The Bacon Cat Law of Internet Popularity.

I can only hope that Hello With Cheese gains a few more fans because of this blog post. They've definitely earned it. (Maybe they'll even re-issue that t-shirt.)

In related news, did you know that you can play the original Apple II version of Oregon Trail right in your web browser, using an emulator plug-in? It's true! I spent a few minutes reliving my childhood, and even though I survived to the end, the results weren't pretty: 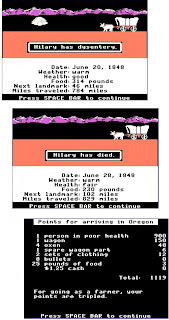 Yeah. I think I'll stick to the writing thing.