I Hate the Word "Tribe"

Just to be clear: this is not a rant against Seth Godin. I actually think he's got some pretty great ideas about leadership, as shown in his TED talk from 2009 (worth watching for the vintage Kindle 1 prop, if nothing else).

My problem is with the word "tribe" and all it implies: exclusion, small-mindedness, and bigotry.

I know. You're probably thinking that tribe is a positive concept, as Godin argues in his book; that it signals connection and camaraderie, often across great distances; that it can be a lifeline for those who feel isolated by their unusual interests. And that is all true and good, ideologically speaking. My specific problem is with terminology, and the unfortunate etymological baggage that comes with calling something a "tribe."

Try this. Do a Google Image Search for the word "tribe." I'm guessing your entire first page of results will be photos of primitive-looking, possibly aboriginal peoples: 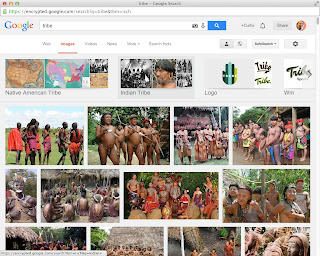 And that, I believe, is the first thing that comes to mind when anyone says the word "tribe:" it's not some noble grassroots movement petitioning for political change, and not some far-flung collective which has self-organized over the Internet. No. It's a bunch of crudely dressed people of color standing around a jungle, forest, or other wilderness. In a word: savages.

I know how people want to use the word, as a rallying point--perhaps even subverting that prejudicial, historical meaning--but it's difficult for me to get beyond it. Because the concept of "tribe" is explicitly discriminatory. People talk about "finding their tribe" in a good way, but I'm always painfully aware of the flip side: that by identifying yourself with one group, you are also willfully segregating yourself from others. If only a select group are "your people," then everyone else in the world is, by definition, not your brethren. And that puts you one step closer to thinking of them as your enemy.

Even if you don't go that far, one could argue that these tribal distinctions are necessary and unavoidable. We could talk about the Rule of 150 (a.k.a. Dunbar's number), but it's more fun to discuss...

Because, you know, monkeys.

If you haven't yet, go and read "What is the Monkeysphere?" by David Wong. Yes, it's on Cracked.com, but don't let that fool you--the tone may be flippant, but the issues it addresses are serious, and his conclusions are sound.

(BTW, "David Wong" is the pen name of Jason Pargin, executive editor of Cracked.com; he's also written two comic horror novels, John Dies at the End and This Book Is Full of Spiders: Seriously, Dude, Don't Touch It. I did not make up any of this.)

Wong's basic argument is the same as Dunbar's, Gladwell's, and any number of other social scientists: that there is an upper limit to human beings' cognitive ability to maintain stable social relationships, and that limit is about a hundred and fifty people. But Wong distinguishes himself on page 2 of his article, where he offers this advice:


[R]eject [the] binary thinking of "good vs. bad" or "us vs. them." Know problems cannot be solved with clever slogans and over-simplified step-by-step programs... take the amount you think you know, reduce it by 99.999%, and then you'll have an idea of how much you actually know regarding things outside your Monkeysphere.


It's not about denying our biological deficiencies. It's about acknowledging and accepting those limits, and finding ways to overcome or bypass them. Can't run fast enough to chase down that prey animal? Try riding a horse, or domesticating dogs, or inventing projectile weapons. Not sure when it's going to get cold again or when's a good time to plant crops? Invent the calendar and keep track of annual weather cycles. The history of human civilization is all about us giving Mother Nature the middle finger and saying "screw this, we can do better."

In this case, however, it's not about science or technology or engineering; it's about changing the way we think of ourselves and others, and that is a tough, long-term, cultural conundrum. It's not something we can cure with a pill or a device or legislation or even a good story. It's something that has to happen to every person, individually, as he or she grows up. You've got to be carefully taught and all that.

I hate the word "tribe" because it implies we're still restricted by that cognitive limit, and we can't get beyond it. And that's just not true. Maybe I don't personally know every single one of the hundreds of people I'm connected to through Twitter or Facebook or other social media, but I know a little bit about each of them. And every small piece of information makes those names and tiny pictures more human to me.

It's not about who's in which tribe, or whether I share all (or any) of their likes or dislikes or political views. It's about people, and understanding that diversity is good. I want to be friends with smart people who disagree with me (as long as they're not jerks about it)!

The thing I'm really interested in is community. (I know some people don't like that word either, and I can understand where they're coming from: again, it's all about usage and intent. Prefixing anything with "the" can assign it an undeserved weight--for example, consider the difference between one show called "Following," versus another called "The Following".)

To me, "community" implies openness and a willingness to embrace new members. Fandom is a community. The Internet is chock-full of meeting places for all sorts of virtual communities, new cultures whose only entrance requirement is a shared interest in something. Create an account and you can immediately start posting and commenting and participating.

You might still have to kiss some frogs, but keep trying and you will find a place where you belong. And if that's taking too long? Start your own community. Plant the seed and see what happens. You have nothing to lose but your loneliness.